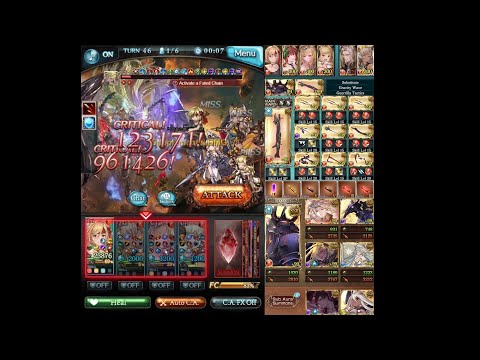 This owns. It'd own even more with skill supplemental, but I'm not spending bricks to show that off; someone else can do it.

Anthuria wasn't needed at all for survivability purposes, but the thought process was that her buff would be a way to protect MC to proc Soldier's autonuke. Anila's meter buff should be enough to make her ougi every other turn, which would not only elevate MC's damage appreciably, it'd also be a useful defensive tool since she's already taking all of Nemone's hostility and can reduce the healing load needed. It felt like Athena and Anila were getting hit extra hard compared to usual, but that's probably just the mind playing tricks on me because of how little damage MC takes.

With only 20% of TA buff in the setup (surely that'll change if Anila ever gets another rebalance, right?), there were some turns here where MC double attacked, but between Anila's buff and Nemone occasionally proccing meter gain, MC didn't have an issue having enough meter to ougi with. If anything, being too full on meter was a disincentive towards pressing Three-Round Burst, which was probably a damage loss overall.

Guerrilla Tactics is kind of weak as a subskill slot. The dodge rate is a bit wasted when MC has 100% dodge on 50% uptime, and the buff itself only having two turns of uptime to begin with is hard to get enthusiastic about. Having it proc twice is still around 5.6m damage every five turns, which is likely better than the other options, but still.

The setup's damage per turn was very good, with MC outdamaging the two normal autonukers by a wide margin, but it's notable that the autonukes contributing so much made pulling 10m for ougi cancels early on harder than they looked. On turn 16 (6:25), for example, a turn that did 20 million damage missed the cancel because more than half of that came after the boss acted.

Only having two delays to play with for the majority of the back half isn't nearly as difficult to deal with here as it was in some other fire solo setups; the team doing higher DPT than usual marginalized that issue.

After having played a few setups with it now, I'm definitely a fan of the MC substitute + Anthuria combination even outside of the damage aspect in conjunction with autonuke on dodge classes. The ability to set up a turn like 46 without it being risky or having to commit to an MC class is very strong.