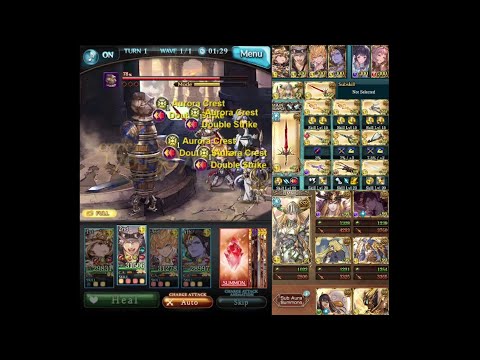 I did my homework in advance this time. As always, this is not intended to be comprehensive, just the results of what I was directing effort towards.

0:00 0 button 3 chain w/ Mary, Apple key
Pretty straightforward; Song and any two good ougi characters does the trick. The constraint here was to fit Mary in with an off-element Opus for one less key swap, and preferably with no Heliogabalus since I didn't feel like spending pots on that nonsense.

The high ougi cap characters (Shiva, Robomi, Lyria) are the baseline here; they're subject to the hard cap and all the nukers should be able to do more than 6.6m.

Light has a whole bunch of characters that come with nukes on ougi, so odds are you'll have a couple, and they're all pretty much interchangeable.. Mary's the weakest of the lot, but she's also the only one that comes with some ancillary benefit. I don't know how much TH affects meat drops since the buff, but fitting her in costs nothing.

For the characters that counter, you probably don't want to rely on those if avoidable; they'll add to lockout.

My experience is that Flamma Orbis is much better to mainhand than Huanglong Spear; between the extra EX mod and the skill damage buff for any potential nukers and Nobita, it's much more juice. Song's damage went up by about 1 million just from that one swap.

Song almost always has the most headroom to work with; she's usually not even close to capping so if she has good rings/earrings, there can be some massive gains. Everyone else has a far easier time doing good damage since they'll have Song's crit buff to benefit from.

If you have an Ultima Bow for whatever reason, that might be nice to use, too. As it stands, Ultima Katana has the highest base attack; better than nothing.

0:34 1 button 1 chain Weapon Master, Echo key
It's tight, but it's possible without Harmonia. I did unspec all the crit nodes, so this is consistent.

MC is on Weapon Master because Berserker's ignition after master levels gives MC enough buffs that it's noticeably slower. If you need some extra damage, though, you can get somewhere around 1 million that way.

Halloween Hallessena has matching fist proficiency and guaranteed triples if you happen to have her.

1:05 1 button 0 chain Apsaras, Echo key (not stable)
This isn't practical with my gear. Don't take it seriously; it's bait.

I left the crit nodes in since this isn't a serious setup on my end. With all the crit nodes removed, this consistently gets to 6%, which requires two Kumbhira counters to finish. Given that the fail rate of one counter is already around 5%, two is unacceptably high. If you have characters ringed or something, maybe you can get it to work.

Jeanne has the most headroom left; she's nowhere close to capping since she isn't being affected by the Bahamut. (Bahamut Sword is the HP pair, though, and switching to it actually lost damage across the board.)