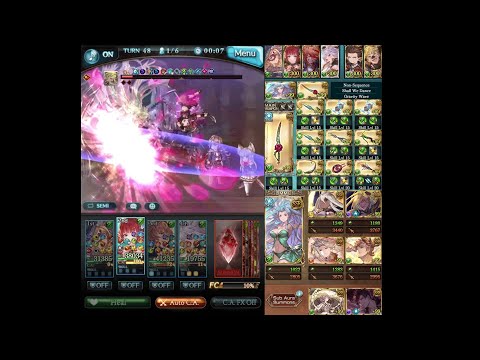 Lilisette does a lot of damage in spite of being very much held back by her cooldowns. That's about all there is to her, though.

The effects on her 1 and 2 aren't especially useful here; the crit on 1 is extra damage but there's nothing to it besides pressing it on recharge, while the debuffs on 2 don't work. The important part is that they enable her passive to get an automatic cast of her 3. It takes a couple of turns to ramp, but with Beaks in the grid, the nuke does quite good damage - 3.5m without the extra damage from Korwa 1 on her.

The downside is that cooldown on her 1 and 2 are the binding constraint on her performance since the proc requires pressing those two in sequence. 7t cooldown on each of them means that her passive's only worth about 500k damage per turn, which is around 11% of her damage output by napkin math - significant, but not that exciting. Without that bit, she's just an attacker with nothing special for autos, just an autocast of her nuke on ougi so powering her up probably involves feeding her meter. The nuke is still big, though; with it accounted for she ougis for 6m+.

As for the rest of the setup, Masquerade has some nukes to go with the beaks already in the grid, and Love Eternal's ougi effect is more useful when there's no Andira buff for TA. Non-Sequence with max stacks is very satisfying to press at max stacks. There's also the thematic match.

The run itself was predictably kind of rough after 50%; Lilisette doesn't do anything too useful there, be it delay or generate above-replacement level amounts of meter or have very high DPT. The team was just a bit short between both 30-25% and 15-10% to being able to FC the trigger as opposed to the ougi, resulting in some extra damage and an additional Trance stack to deal with. Not unmanagable, outside of the one Trance 3 turn with no defensive coverage that took some real luck to survive.