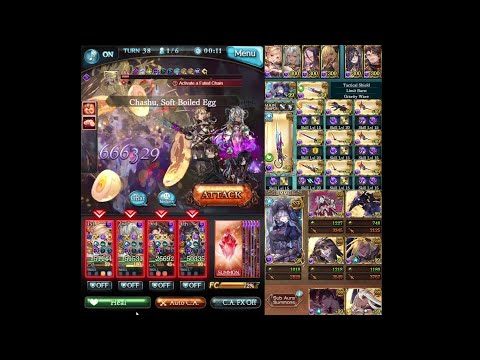 Not a particularly synergistic lineup, but the parts are more than strong enough to get it done.

Given the condition that MC's not on Kengo to provide Lich with unlimited meter to delay with, Ippatsu does a good job of covering gaps; having a delay of his own along with a party meter gain on a very short cooldown adds up to quite a bit of delay power. It's not really needed since there's enough damage to cancel with in the first half and enough meter to FC with in the second half, but he's performing as intended. His debuff accuracy is a bit suspect, though, in spite of having a ring for it.

The 30 meter on Ippatsu's 1 lines up well with Lich, since she ends turns with +50 meter from her own autonuke and +10 from Fediel buff, producing an ougi if anyone else before her in the batting order has one.

One weakness is that he takes a ton of damage. Part of that is not having either huge damage or stackable attack down to cap, but he also doesn't have any personal defense, whereas Lich and MC have ways of taking care of themselves. His own damage is also quite unimpressive, and remembering to press 2 on recharge wouldn't do much; he's very much a supporting character.

Relic Buster MC's still fine alongside the Fediel/Lich shell, but it's less good than it is elsewhere. MC's autoattack damage is less of a factor when the team's trying to ougi, and Tactical Shield is a bigger draw when the team doesn't already have a source of large shields. Fediel sword being a desirable mainhand isn't great with this grid, either; there's no support for autoattack damage and the autonuke with a gun would be much better.

The play itself wasn't anything special. Going into 30% without Fediel buff up to tank Black Spear was especially poor and leaving 25% with a stack following that probably contributed to the sustain issues I was having.