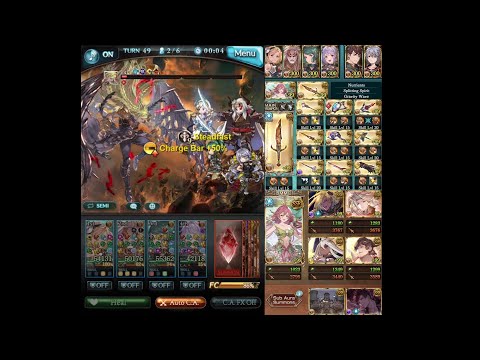 Herja is more functional than I had been expecting, although she's definitely still not good.

The change to her substitute is a great one; 1000% def (90% damage reduction) is much better than 50% cut on top of functioning in V2 raids, and it goes very well with a single target multihit boss like Beelzebub, where there are enough packets to refill her entire stack in one turn on a double attack.

The real problem is one that hasn't changed in the rebalance - the nuke that's the payoff for building stacks is just too weak. With no skill supplemental in the grid, each cast of her nuke is only 1.2m damage, an amount that'd be low for a autonuke that triggers every turn. Even the ability to save up four casts of it on one turn at nine stacks with another three from her heal doesn't do enough when that combines to be less than half of what it takes to cancel one ougi.

It also doesn't help that she doesn't do anything in the way of utility - no debuffs, no delays, no partywide anything; it's all personal outside of the substitute - which, again, is a really good one, it's the rest of the package that's letting her down. If nothing else, another source of hostility would be nice to further enable soaking random target hits for more stacks; the one hostility EMP node doesn't cut it.

A way to make her autoheal proc reliably wouldn't tip the scales, but three guaranteed stacks would be nice to have. As it stands, since she only has her built-in +50% def to work with, leaving her at low HP feels risky.

The rest of the frontline has enough utility to get through, mercifully, with Doctor + Arsene mainhand really capable of patching holes.

Herja's final damage output wasn't all that bad, but for the amount of clicking it took it's pretty lackluster. Without access to Tempering in magna, all there is available to help out is slotting Ished, which probably isn't strong enough to be a gamechanger.