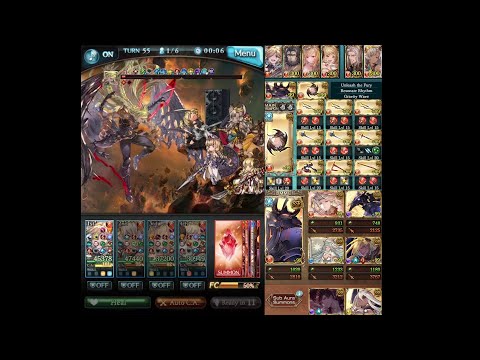 Rising Force's one cool stunt of guts tanking Chaos Legion isn't really needed with Athena 4 freeing up FC for it, so the class winds up being a Draconic mainhander with three damage slots over defensive utility from Elysian/Lumberjack.

The downside to mainhanding one of the best defensive options available is that not being able to run Opus with glory key is even more unfortunate than in most of these fire setups. The damage ended up being fine, but everyone could definitely have used the ougi juice even if it's not Kengo; Anila 3 kind of turns them all into ougi comps. Fire GW harp is probably the play.

The setup works fine; MC having three skills to generate extra damage provides a lot of flexibility with regards to trigger cancelling and FC generation. Resonate Rhythm is especially nice with meter gain buffs. MC not having a delay wasn't an issue in the back half between good DPT,enough FC generated to spend two and still have one built by 25%, and Draconic making taking stacked autos less of an issue.

50% featured a repeat of the indefinite mirror image at 50% not actually being indefinite; if not for Rising Force's guts, Nemone would have detonated. I'm pretty sure it's an invisible hit count thing; this run had Mugen's permanent echoes on most of the party so the hit count would have been higher than usual.